The final month for our game project and we have a lot of things that still need to happen before we're happy with our game. Every time we turned around there was a new game threatening bug to fix, or some art being rendered improperly. But that's what it's all about, succeeding through great difficulty.

For this month I begged to make another level, and though at first the answer from our art lead was "no", he eventually noted that I finished with all the other tasks in order to start the new level. So it was that level 2 was born. But first things first: I finished the HUD redesign and polish. 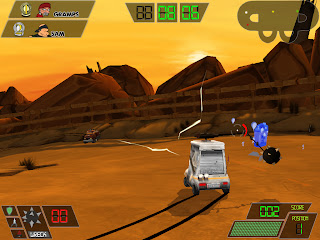 Then there were minor tweaks, like who killed you and who you killed message pop-ups, health dots instead of health bars, screen realignments that we'd never noticed before, the new modulaser, trophies, and radar size/visibility adjustments.

Once I was given the go-ahead, I started my block out of the environment. I had already decided I wanted to do a small single level environment for maximum carnage, and yet something with ramps and jumping to help the environment feel larger than it really was. I had been playing with the idea of using the type of arena featured in "Twisted Metal 2"'s "Suicide Slide" level, but changing it to fit our needs and theme. I blocked it out and made the changes our art lead requested, and then blocked out the collision mesh before turning it over to the art lead for a.i. waypoint placement, lighting, and everything. In the end we came out with a second level using 90% of the assets from level 1, and I was happy with the way our ideas all came together.

The view from the level selection screen in the game. 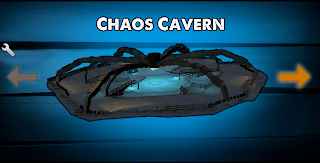 The view of the level  from the outer edge of the arena. 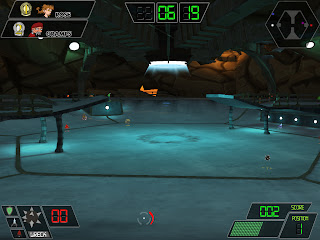 This view shows some of the ceiling and the lighting of the center of the arena. 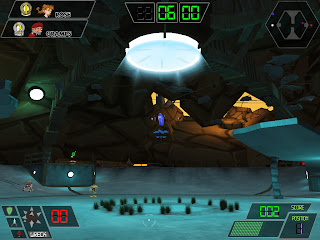 So that was the month pretty much, I did some work on my project critiques for next month. Overall though I took it easy at home and tried not to kill myself with work for once. Here's a video of some of the game play of our game.
Posted by Unknown at 16:10 No comments: