So after a couple months without any maya related classes we finally are able to jump back in with CDC ...

Home: finished char blockout/roundout, then compared to charmod from 3df and was happy to see better results now that I’ve been working with maya for a while.

Blockout/roundout ... it was only after I got further down the road that I realized my mistake in leaving out his groin area and how extremely important it is to leave it in. oops! 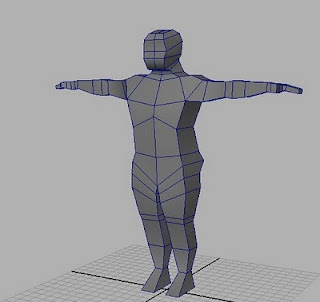 The hands were a little more difficult than they looked ... even after I thought they were done, I'd go back and find n-gons here and stray vertices there ... shame on me.

Home: Started char torso … this one’s going to take a while.

I was in the "h" in "wishes" as in "Full Sail University wishes you a happy new year", and other than the idiots with the led flashlights I'd say the event was a success. I hear we broke 2 guinness world records ....

Home: “finished” up the back of the torso and mirrored over the geometry. Had to manually reconnect a lot of the vertices since I had moved things around a lot with the new edgeflow.

The torso was actually a little more intimidating than it was difficult. 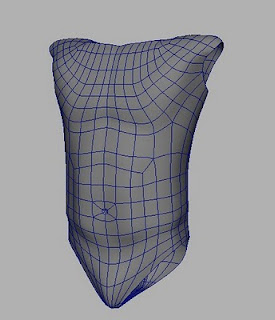 Lab: since I’d taken some new notes on the torso in class I decided to spend most of lab working on updating the torso to match the newer information. Turned out really good so I turned it in. Then I started setting up the files for the legs file.

Home: Started and I believe finished/close to finishing the legs .. really too tired to tell much of anything ATM :’(

The legs went together easy once I figured out why it was important to wrap the vertices inwards following the flow of the inner thighs ... it made for a very natural curvature. 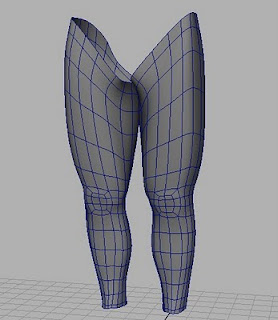 Home: started working on the arm, elbow gave me a problem, but I think it looks even now. Connecting the leg, arm, and hand to the same torso seems to be a big pain in the ass … but I’ve got it done now. Had to add some edgeloops as well as delete some. That means out of everthing I’ve turned in so far none of it is the same as the geometry I currently have. Oh well, the pieces look good together.

The arms were like the hands, I had to keep going back and fixing things I had done wrong ... I think in the future I'll just assume everything will be hard so I don't make the same mistakes I did with the hands and arms on this model. 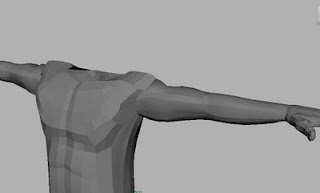 Lab: started working on the feet, was giving me a rough time …

Home: finished working on the feet, they don’t look too hot, but I’ve too many things to do to pick at it any more.

The feet I never did go back and clean up ... other than to find out that I had some faces inverted and had to fix that up to make sure the uv'ing would go smoothly ... so that's what that thick edge line was .... heh 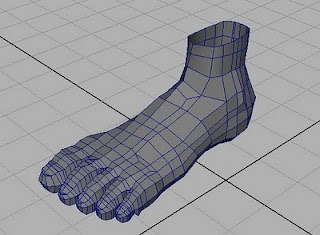 Home: worked on the face using planar mapping, a little rougher than using a cube, but easier than I thought it would be overall. Once I finished that, I started working on the zoo scene.

This was new for me, planar mapping, and it was actually a little fun ... though difficult. Without a proper road map to copy from my notes I think I wouldn't of been able to even get this far. 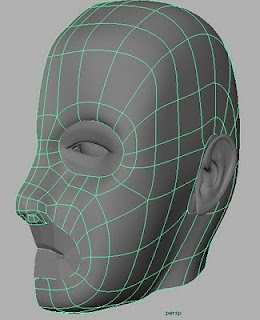 Home: worked on zoo scenery … not a lot of time to work on it but I think it’s pretty much good to go at it’s current level .. unless we’re supposed to uvmap it or add textures or w/e.

After finding some resources online, I put together a small part of my favorites and made a maquette style base for my scene.

Lab: spent most of my time building and rebuilding over and over again the ear … after the first 2 hours Eddie showed me some pix he was going to use to model his ear and I was able to use those to produce an ear within an hour.

Home: Finished up molding the ear to the head and started working on the eye. Needs some final touch-up’s before I head down to the mouth and finish that off.

One of the most beautiful parts of my character ... his ears. 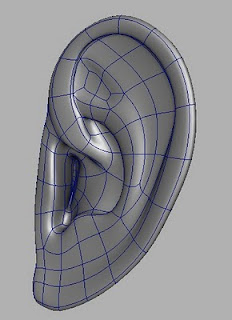 Lunch: worked on rounding the eyelid to the eye some …

Home: worked on the mouth and nose as well as making the face more contoured and natural looking. Still needs a lot of work, emailed Marcus with the issues.

He told me "it's flat" so ... I didn't really know where to go from there other than to just start rounding things out ... not sure if after this it gets worse or better. 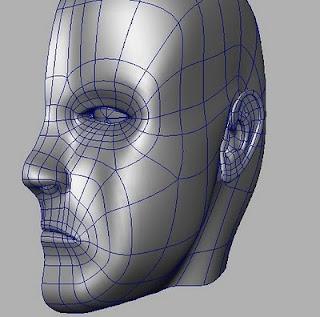 Lab: working on the face/head

Home: made the face/head look human, but it’s still not really looking like the model. Combined/attached arms/legs/feet/hands and then softened up the edgeflow with the sculpt paint tool. 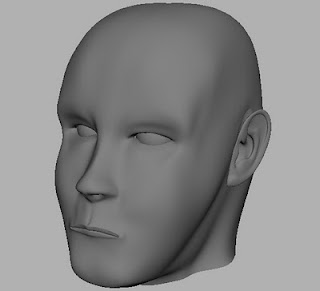 Home: connected all the pieces together and created a neck. Sculpted a little around the ass and spine area, and then went to work on the hair. After trying to cv curve extrude some hair I decided to make some hair with nurb cones. I was able to fill in most of his head with these cones … I want to see what other students did to their hair before I keep going. This style looks good but is very tedious. :/ Then I went

ahead and drew out the clothing and scanned them into the cdc portfolio. I still didn’t get time to model clothing like I wanted, but we’ll see what happens. I think I’ll need whatever extra credit I can get my hands on to get through this course. 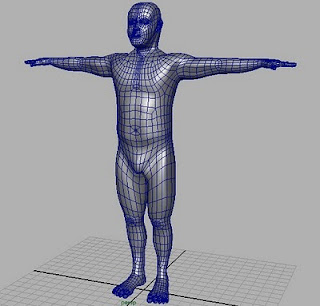 Lab: finished up the extra 100 hairs for a total of 1100 hairs, moved on to uv mapping. I still suck at it but all I ended up doing in lab was setting up the uv’s in shells and laying them out to be relaxed/shaped or w/e.

Home: after laying them out and using the different smooth/relax/shape tools Marcus showed us in class, I started laying them out in the 0 to 1 space. Found out there’s a pretty cool tool that will do it for you … but it makes everything the same size and that’s not what I needed since I guess I didn’t do it all right or something. Ended up going to bed before “final” layout.

1100 hairs, but only 7 or 8 of them are unique out of the whole lot of them. There's basically 7-8 different positions a hair will fall in depending on the part of the head the hair is on ... well that's my theory anyways and I'm sticking to it. I think it turned out a lot better than I thought it would. Other facial hair was optional, and though I wanted to I found myself only able to get to completing clothing before the project was due. 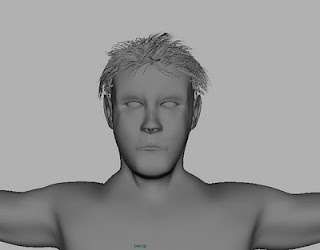 Home: Finished layout of uv shells … will see how everyone else has theirs laid out before I call it done. Modeled the clothing and was able to group everything appropriately. Not happy with the way the shirt turned out, but everything else looks pretty cool … even if it’s not exactly what I drew :O

Since I didn't really do proper uv's in shading and lighting class, I don't know if this is right or not ... I just tried to make everything even since I didn't know what this character will be used for later on. 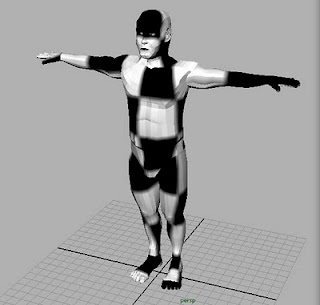 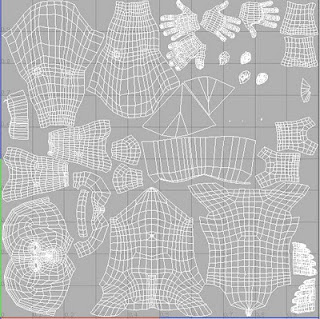 Home: Finished rigging, and fixed all the errors the soft binding technique gave to the model. Posed the character and imported him into the scene. Adjusted the clothing and then set up the final file formatting/naming. Other than a pre-turn in check, I should be good to go.

A much easier rig than 3d Foundations class, but in this class we had to use smooth binding and therefore had to "paint" weights on the skin. Since I don't claim to be much of an artist, I decided to look for the numbers in the graph and use those to weight specific body parts at a time ... and got done a lot quicker than everyone else trying to use the sculpty paint tool. 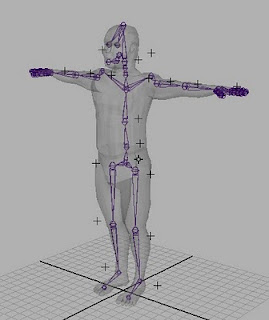 A quick little pose, getting him ready for zoo scene I'd already built .... 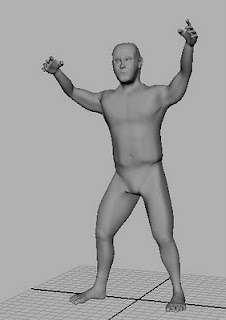 Lab: Found and fixed some reversed normals, this did however unbind my rig from the character, so I found myself rebinding it and re-weighting it. After doing that and finding all the major areas of flex that didn’t belong I found it almost time to clean up. So I went ahead and set everything to the turn-in settings on the file and submitted it all. FTW? On a side note I bombed the final test we took in lecture. Who knew it would be about human anatomy instead of maya?

Here's my final turn in scene for the class ... I managed to also build a snake prop and some awful clothing that has no wrinkles or anything ... I just didn't want to submit him naked. ;) It's also been lit, though only with a quick 3 point light setup ... not my favorite, but it was a quick fix and mostly did what I wanted it to do. 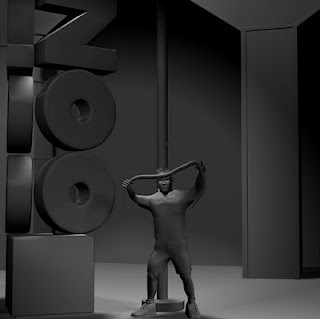